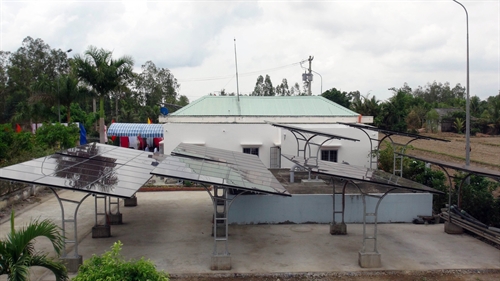 HCM CITY — The potential for solar energy in Việt Nam is huge but needs appropriate policies to encourage investment, a conference heard in HCM City on Monday.

Speaking at a Vietnamese – German conference on “Photovoltaics in Việt Nam: Free-field and Net-Metering before Breakthrough”, Sonia Lioret, head of the renewable energy component at the German Agency for International Co-operation, said Việt Nam has enormous solar potential, especially in its central and southern parts.

It has average solar irradiation of 4-5 kWh/m²/day, which is comparable to Thailand and the Philippines, which are more developed solar markets in the region, as well as to mature international markets like Spain and Italy.

The Vietnamese Government has recognized this potential and aims to significantly increase renewable energy production including solar power.

Under its newly revised Power Development Plan for until 2030, which includes ambitious development targets for renewables in general and solar energy in particular, the capacity of solar photovoltaics (PV) shall increase from around 7 megawatts (MW) now to 850MW by 2020 and 12,000 MW by 2030.

The solar PV market in Việt Nam is at an early stage, Lioret said, adding that 6-7 MWp has been installed in the country.

Approximately 80 per cent of that capacity is deployed off-grid, mainly through small scale applications and only 20 per cent is connected to the grid, with a few medium- and large-sized systems of more than 50 kWp used for piloting and demonstration.

Since there is no suitable policy framework for solar PV investments in Việt Nam, the main business model now is self-consumption, delegates said.

The Government would soon strive to create suitable mechanisms and policies to encourage the sector’s development, he said.

Besides, “financial and technical support from international organisations and developed countries to promote renewable energy developement in Việt Nam is really needed,“ he said.

Rainer Brohm, a renewable energy consultant, said the German Government has funds to help and support investment in case a Vietnamese company partners with a German company.

The study shows there are attractive investment opportunities, but also shows that the low electricity tariffs in Việt Nam are a big challenge and an assumption of a future increase in tariffs is a critical factor in investment calculations.

Patrick Gavin Matweew, director of M+W Group’s Energy Business Development in Asia-Pacific region, said: “Việt Nam is a perfect market to look into solar, we thought that is the market we want to invest in in 2016.”

The Vietnamese Government should provide clarity in terms of technical regulations to connect to the grid and the feed-in tariff and create policies that create a stable and reliable environment — which would attract international investors — for the solar market to kick-start, he said.

Bjorn Koslowski, deputy chief representative of the Delegate of German Industry and Commerce in Việt Nam, said Germany first invested in this kind of energy 15 years ago.

With German technologies and equipment and know-how, German experts are willing to support Vietnamese companies in this sector in planning and implementing all PV and renewable projects for sustainable development, he added

PROMOTING EAP MODEL WILL BRING A LOT OF BENEFITS FOR BUSINESS